The Grasmoor Massif from Robinson 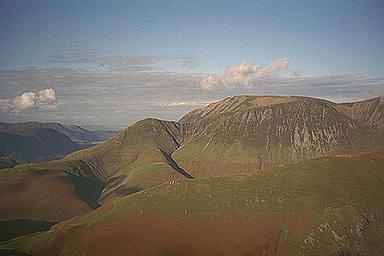 Newlands Hause lies off the bottom left-hand corner of the picture and the ridge in the foreground rises from there to Knott Rigg off to the right. Beyond this ridge on the left is Whiteless Breast and the main route up to Whiteless Pike. Whiteless Pike is seen riven by two Gills, the one on the left unnamed but the one on the right known as Third Gill. Between them is Bleak Rigg. The ridge from Whiteless Pike passing above Third Gill reaches Wandope. The eastern slopes of Wandope are seen here face-on. Beyond Whiteless Pike and Wandope is Grasmoor. Further in the distance, on the left is the northwestern summit of Mellbreak, Carling Knott and Burnbank Fell, these last two overlooking Loweswater which is just visible. Larger version of this picture.